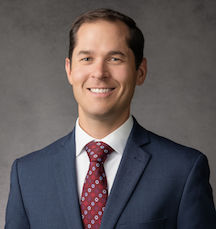 After law school, Jared worked as a judicial Staff Attorney for Idaho State Sixth District Judge Mitchell W. Brown and then Idaho State Fifth District Judge John K. Butler. While clerking for two different judges for two and a half years, Jared did legal research and writing on a variety of legal issues both criminal and civil.

Jared then went into private practice by joining the law firm of Merrill & Merrill, Chartered, in Pocatello where he primarily practiced Social Security Disability law for a year and a half. Jared is excited to be part of the team at Racine Olson and practicing areas of law that were more of his focus during his academic studies. Most of Jared’s current caseload is comprised of real property and land use related matters. Jared is also practicing water law. Jared has helped numerous clients successfully navigate complex legal disputes and issues to resolution.

Personal Info
Jared and his wife, Michelle, enjoy many outdoor activities including camping, hiking and mountain biking. Jared enjoys outdoor adventuring year-round and appreciates the variety of activities that each season brings. Jared and Michelle were thrilled to welcome their first baby in November 2020. Their baby boy has been an exciting addition to their home, and they can hardly wait to take him on their adventures. Jared has been involved with the local youth mountain biking program, NICA, as a coach and ride leader. Jared is an avid cyclist and can often be found out among the hills on the fantastic roads and trails the Pocatello area has to offer.
Contact Us
Practice Areas
Client Reviews
★★★★★
"When it comes to our business work, we trust Racine Olson.” Premier Technology Inc.
★★★★★
“Randy has been our family’s attorney for many years. I’ve not only retained Randy to help with our family business, but I’ve used Randy and his firm in more than one complicated issues. I’ve never been disappointed.” Shawn - Previous Client
★★★★★
"Pat George, well there is so much I can say…. EXCELLENT lawyer! He leaves no stones unturned. If you are in need of an excellent Lawyer I would highly recommend Pat George. He turned a life threatening accident into a life changing event.” Personal Injury Client
★★★★★
"The attorneys here are just fantastic my dad and I are big fans…they are the best in Pocatello. I have lived in Poky my whole life” Previous Client
★★★★★
“I had been to many other law firms concerning my case. They were willing and able to help me out and I feel confident that they will do what is best for me.” Previous Client
★★★★★
"Fred Lewis is very knowledgeable, courteous, and efficient in explaining everything you need to know to help you win your case. He truly cares about you as a person and is on your side." Workers' Compensation Client
View More
Submit a Law Firm Client Review