The Idaho State Journal ran this AP article on Wednesday, December 2, about trademark infringement litigation between the San Diego Comic-Con and the Salt Lake Comic Con. The Associated Press (probably actually a reporter for one of the Salt Lake papers) notes that the parties appear close to a settlement of the lawsuit, but it is a little confused about the legalities.

4The San Diego Comic-Con has run conventions in California for years, while Dan Farr Productions of Draper, Utah has run the Salt Lake Comic Con since 2013. More than 120,000 people attended the SLCC this year, in spite of a trademark infringement suit filed last year by the San Diego group in 2014.

The San Diego group (SDCC) has a number of registered trademarks, including the design mark

as well as the word marks COMIC-CON, ANAHEIM COMIC-CON, and SAN FRANCISCO COMIC-CON. The hyphens are important. SDCC attempted to register COMIC CON in 1995, but abandoned the effort after its registration was challenged by the Chicago Comicon. 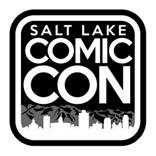 The Patent and Trademark Office granted registration of the word mark in July, over SDCC’s objection that it is confusingly similar to its various COMIC-CON marks. The Trademark Office found that the words “comic con” are generic descriptors of a comic book convention, and therefore cannot be the subject of trademark rights. Therefore, SDCC cannot have rights in the words “comic con” apart from their use in conjunction with the words “San Diego,”  which leaves SDCC’s registration of COMIC-CON kind of up in the air.

Anyway, back to the AP article. This passage caught my eye as being inconsistent with the way trademark proceedings actually work:

Meanwhile, the U.S. Patent and Trademark Office last week suspended its own ruling until the federal case is resolved. In July, the office sided with Salt Lake and awarded it a trademark for its name. Officials said “comic con” was too generic to trademark but “Salt Lake Comic Con” was specific enough to qualify.

This makes it appear that things are going badly for Dan Farr Productions. Not true. The Trademark Office did not “suspend its own ruling” granting registration of SALT LAKE COMIC CON. The registration is valid, at least for now. What actually happened is this:

After Dan Farr Productions ran its first Salt Lake Comic Con, SDCC sent a “cease-and-desist” letter advising that, in SDCC’s opinion, the name “Salt Lake Comic Con” infringed its registered trademarks. Dan Farr responded by applying to register SALT LAKE COMIC CON and the design mark. SDCC was watching for this, and objected to the Trademark Office before the application was published in the Trademark Official Gazette. The Trademark Office considered that objection but decided that “comic con” was a generic term. It allowed Dan Farr Productions to amend its application to disclaim any rights in the words “comic con” except as used in its marks. In other words, Dan Farr Productions would have no objection to any other party using the words “comic con” as a trademark unless they were used in conjunction with “Salt Lake” or in a design confusingly similar to the one above. The TMO allowed the application for the word mark to be published in the Gazette, and after the 30-day comment period, granted the registration.

In the meantime, the SDCC filed a trademark infringement suit in federal court in California. If the court finds that the mark SALT LAKE COMIC CON is likely to cause confusion in customers — which in this case includes not only attendees but also exhibitors, publishing houses, movie studios, and William Shatner — then the court could find infringement and order Dan Farr to stop using the mark (and perhaps pay damages). Federal courts have the final word on this issue. The court would also order the Trademark Office to cancel Dan Farr’s registration.

Dan Farr Productions fought back by filing a counterclaim asking the court to cancel SDCC’s registration for the mark COMIC-CON, on the grounds that it is generic, as determined by the Trademark Office. This is a big threat to the SDCC’s trademark COMIC-CON. I’ll explain why in a second.

Last week, the TTAB did not “suspend its own ruling” granting the registration. It granted Farr’s motion to suspend the administrative action. This is an entirely different thing. The registration for SALT LAKE COMIC CON is presumptively valid until the California court says otherwise. The TTAB almost always suspends its cases when there is a court case pending between the same parties, because the court has the final say on the issues of infringement, genericness, and so on, and it would be a waste of the TTAB’s time to decide these issues while the case is pending.

So the matter is now left to the court for a final decision, unless the parties can settle, which it appears that SDCC now wants. It doesn’t really want a court to decide the validity of its mark COMIC-CON.

Normally, a hyphen is irrelevant in determining whether a phrase is generic, or whether it infringes. If I call my company “Treasure-Valley-Coffee,” I infringe no less on Treasure Valley Coffee‘s trademark by  than I would without the hyphens. (Good coffee, by the way.) Under that principle, if “comic con” is generic, so is “comic-con.” Furthermore, SDCC may have effectively admitted that it is generic when it abandoned its application for COMIC CON. So SDCC would rather not have a court or the TTAB look seriously at the issue. It looks like it will enter a settlement with Dan Farr Productions that will allow it to continue to use “Comic Con.”

If so, that is further evidence that “Comic Con” or “Comic-Con” or “Comicon” are generic terms for comic book conventions. Why doesn’t SDCC just admit this and quit fighting these battles? Probably because people get attached to their trademarks and don’t want to give them up, even when they aren’t worth much.